You are here: Home1 / Types of Care2 / Dementia

Our Care Homes in Hampshire specialise in residential and dementia care and have been thoughtfully designed with dedicated dementia care areas. We studied the best dementia care homes around the world, alongside taking advice from Stirling University (a leading authority in dementia) to ensure that we catered for the unique needs of our residents with dementia. As a result, our Homes are safe and secure, but importantly, provide a comfortable and homely environment where residents are encouraged to be independent and make full use of our wide range of facilities and grounds.

With a ratio of staff to residents that well exceeds industry norms, we fully appreciate that residents living from dementia need expert, high quality care. To support this, our care teams receive specialist independent dementia care training to ensure that our experienced staff develop their in-depth understanding of our residents’ needs and requirements. 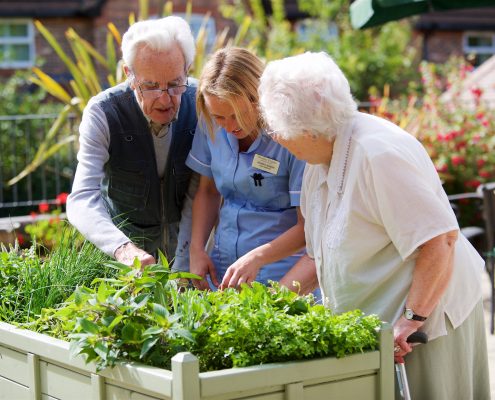 Arrange a tour of our Homes

Book your visit to Woodley Grange or Barton Lodge to find out more about our award-winning care.

Dementia is the name given to a group of illnesses that affect the brain, of which there are several types; most common is Alzheimer’s disease. A typical early sign of dementia is someone becoming forgetful and / or confused; for example forgetting names or how to get home. In the later stages, people are likely to find everyday tasks, such as shopping or cooking, difficult. They may also find social situations hard to manage.

There are around 750,000 people in the UK living from some form of dementia. So if you or someone you know is diagnosed with it, you are definitely not alone; there is plenty of support available from the professional health community. It mainly affects older people, both men and women (two–thirds of people with dementia are women, which is generally due to the fact that women live longer than men), but being old and occasionally being forgetful does not mean you have or will get dementia.

To find out more you can visit the Dementia Care website (http://www.dementiacare.org.uk/)